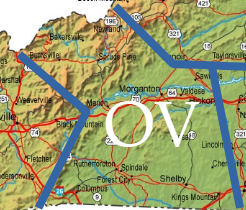 In late summer of 1780, British Maj. Patrick Ferguson and his Loyalist corps began campaigning through the foothills of the Carolinas. Their orders were to suppress Patriot militia activity and to protect a resupply raid of the Charlotte area by the main British army in the South. Ferguson camped at Gilbert Town near modern Rutherfordton. Throughout his stay, various units made raids on Patriot homes and stole supplies across the region. Under continuous harassment by Patriot militia, Ferguson finally threatened to “march this army over the mountains, hang your leaders, and lay waste your country with fire and sword.” In response, angered militia units and volunteers marched on Gilbert Town, the most famous of them crossing the Appalachians on foot and becoming known as the “Overmountain Men.”

This tour hits the key North Carolina locations of the Overmountain Campaign, and ends just over the South Carolina border where these Patriots achieved their objective of crushing Ferguson. You also get side trips from the Cherokee and Tory wars, the second British campsite in the Race to the Dan, and an early resolution against the King.