How They Lived Between Battles

Compared to modern camps, Revolutionary War encampments were not comfortable places. But soldiers of the day were not accustomed to modern comforts! In good times, multi-day camps of the regular armies had:

Camps were placed near streams for drinking and cooking water, featuring one or more mills for grinding grain into flour, with enough trees nearby for firewood. A line of sentries or “pickets” encircled the camp, far enough from the edge to provide early warning of an attack, and some of the cavalry would keep an eye on the closest enemy forces.

One historian writes of Camp New Providence (in today’s Charlotte): “There were probably 50 wagons carrying gunpowder, tents, officer baggage, or barrels of rum. The camp was a busy place. Every few hours, express riders arrived and departed carrying written status reports, strength returns, and the latest news. During the day, local farmers arrived with cattle, chickens, and wagons of produce hoping to sell for currency.”[1]

These camps were huge by the standards of the day. The largest city in North Carolina, Wilmington, had around 1,200 people. During the 1781 campaigns here, the regular British and Continental armies had between 2,000 and 2,500 men each, plus followers. Based on today’s city populations, that would be like having two two-million-person armies moving through modern N.C.!

A tent for the soldiers was a single piece of canvas. It was slung over a rope raised off the ground, with the ends staked down wide so they form triangles viewed from the end. As many as eight privates could be assigned to a single tent, though some would be out on duty at any given time. They slept on the bare ground or wrapped in blankets. Open-sided tents were used for selling or providing supplies, often with small folding tables and chairs. Part-time “militia” soldiers rarely even had tents or decent blankets.

The commander usually took over the nicest nearby house. If the camp was near a town, the British army forced local residents to house their officers (a specific complaint in the Declaration of Independence). If not, higher-ranking officers had larger, sometimes round tents with sides. Many officers had servants—often enslaved in the Continental Army—and were allowed to transport fancy dishware, cots, chairs, and portable writing tables, libraries, and liquor cabinets!

Unlike modern army camps, these had no kitchens with serving lines or packaged “ready to eat” meals. For every several tents there would be a fire, some with metal tripods over them with hooks for cookpots. The men cooked for themselves. They ate whatever they or the “commissary officer” could purchase from local farmers. Hunting and fishing supplemented soldiers’ diets and provided recreation.

When the armies could not purchase enough food, they would “forage” from local residents. Sometimes they would pay for these goods, though depending on which side the residents were on, that might not provide the kinds of money they could use. Often, though, foraging just meant stealing.

Typically soldiers ate only breakfast and supper, with whatever utensils and dishes they brought from home. The food might be the same you and I would eat, but, “Army food was usually provided in raw form. Staples consisted of flour, corn meal, or bread, and beef, pork, or fish. Sometimes beans or peas were provided. At Guilford Courthouse, the Virginia militia was supplied with bacon, beef, mutton, flour, corn, and corn meal.”[1]

These were served “as is” or cooked without fancy recipes. The army could not carry a bunch of spices with it, and salt was very expensive in those days. It could not be manufactured like today, just mined like metal or evaporated from sea water. When a British general in North Carolina ordered most of his wagons destroyed so he could move faster (see “Ramsour’s Mill”), he kept three types of supplies: ammunition, medical supplies, and salt!

In long-term camps, the “bathrooms” were just open pits. As one got filled, it would be covered over and a new one dug. Otherwise men would just “go in the woods” or in streams, (hopefully) downstream from where water was drawn.

Medicine had not advanced much since the Dark Ages. Doctors knew nothing about bacteria or viruses, and did not bother washing their hands between patients. The first vaccine, for smallpox, was still new and gaining trust. For wounds, doctors could do little more than remove bullets, place bandaging, or cut off the limb—all without painkillers! They believed illnesses were caused by an imbalance in four primary liquids or “humors” in the body. A primary form of treatment for many illnesses was to make someone bleed in an attempt to “balance the humors.”

Not surprisingly, more soldiers died from illness (and resulting medical treatments) than directly from war wounds.

There were no radios or TVs in those days, much less computers and smartphones! When not drilling or working, people entertained each other by playing simple games with cards or dice; told stories; sang or played musical instruments; and held running races and wrestling matches. Men often had to repair their equipment or clothes, make their own bullets, and shape flints for guns. Most could not read, and those who knew how could not carry libraries around on their backs. They had to content themselves with one favorite book, often a Bible, or writing and re-reading letters.

Both armies were careful to keep their men supplied with “spirits”—alcohol, primarily rum or brandy. Continental Maj. Gen. Nathanael Greene wrote, “‘Without spirits the men cannot support the fatigues of a long campaign.’”[1]

As discussed on “Minorities in the Revolution,” people of many spiritual beliefs served in the armies. However, the Anglican Church was the official religion in Britain and dominated the colonies, with other Protestant sects represented. (Some of the larger ones in the United States, such as Moravians and Quakers, refused to fight.) The regular armies might have official chaplains that gave Protestant Christian services on a Sunday, and officers could attend local churches. Some pastors traveled with militia armies and offered impromptu services. All other believers had to tend to their own religious needs.

Women, children, and servants, free or enslaved, were present as “camp followers.” Many were wives of the soldiers, and they washed, sewed, nursed, guarded supplies, tended livestock, and made, bought or sold goods. However, since most of the men were farmers, most of their wives stayed home to run the farms.

Follower women were not prostitutes; in fact, prostitution was banned or discouraged in army camps. There are numerous cases of commanders ordering officers to ensure the followers were “of good character.” In fact, all camp followers were considered part of the army, subject to (and protected by) the same military laws—and punishments—as the soldiers. Often they were paid, received the same rations as the men, and provided some of the functions supplied today by Quartermaster units and support contractors. 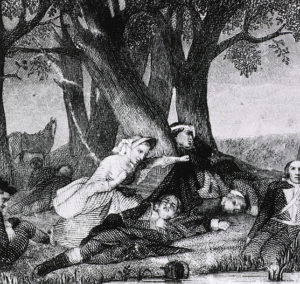 Camp followers lived under the same conditions as the soldiers, good or bad. Women and servants, including enslaved people, frequently exposed themselves to the dangers of battle. They refilled canteens, treated wounds on the field, or retrieved powder and ammunition from the dead. Some were killed or maimed in the process. A few are known to have picked up arms and joined the fight.

Despite their value, camp followers were also a burden. They could slow an army’s movement and required that much more food. Just like soldiers, the threat of punishment was not enough to prevent trouble. Lt. Gen. Lord Charles Cornwallis complained during the Race to the Dan that the women were “‘the source of the most infamous plundering.'”[1]

Men too old to fight were capable of providing other services like gun repair, and even children were put to work with chores like gathering firewood and hauling water.

Sometimes refugee camps would spring up next to an army’s and follow behind its march. People were often afraid to stay home when an opposing army approached, due to violence by local partisans from the other side. 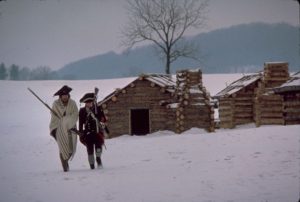 When an army was on the move, there was no time to set up everything, and the number of camp followers were limited via quotas issued by commanders. Soldiers often slept in the open, even in winter. Food could be hard to come by, or would be the same thing over and over: uncooked grain, green corn, whatever they could find.

It was not unusual for armies to march 20 miles on a normal day, sometimes more, sometimes day after day. Usually for the infantry (foot soldiers) this was done on shoes of thin leather at best, and always carrying a heavy gun and all of the man’s possessions on his back. People did not typically take baths and wash clothes nearly as often as we do today, but for soldiers it could go far longer. Maj. Gen. Nathanael Greene, quoted earlier, went an entire month in North Carolina without taking off his clothes!

Conditions in the 1780 Continental winter camp in Charlotte were terrible, probably worse than at Valley Forge, Penn., earlier in the war. Many people had no tents, crowding under lean-tos or into crude huts with large gaps that let the rain and cold wind through. Food, wood, and winter clothing were scarce. Both Gen. George Washington and Greene wrote desperate letters to their political leaders seeking help, but those leaders often had little to give.