Complaints in the West 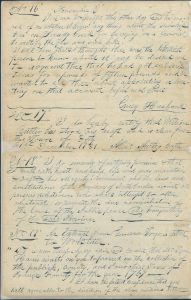 Eleven years before the American Revolution broke out, European-Americans in what then was the western half of North Carolina were upset with:

For example, farmland was taxed at the same rate across the colony even though crop yields were higher per acre in the east. As another example, in the 1766 Provincial Assembly, four counties around Albemarle Sound had 21 representatives for “3,300 white male taxables,” but four counties in the west had only nine for 5,776 such men.[1] Some historians have added as a reason the palace Royal Gov. William Tryon built at public expense in New Bern, but writings from that time make little mention of it.

The protestors adopted “the Regulation” for their association’s name, from a group formed in South Carolina for protection against an outlaw band. That group had forced the creation of a court system on the S.C. frontier. In April 1768, one set of “Regulators” took over the Anson County Courthouse (near today’s Wadesboro) and wrote what became known as the “Anson Regulators Protest Paper.” In it they complained about how taxes were levied and said that “no people have a right to be taxed without by consent of themselves or their delegates.” This somewhat garbled statement was the first formal complaint in the colonies against “taxation without representation” sent to British authorities, and relates to the fact county officials were appointed instead of elected.

A Fatal Shift Toward Violence

The Anson group had equally radical supporters in other counties. A milder approach was supported by a group in the Sandy Creek area southwest of modern Burlington, perhaps softened by the influence of pacifist Quakers there. In fact, a Quaker named Herman Husband wrote political tracts in support of the Regulators so forcefully, the colonial authorities wrongly arrested him in 1768 as a leader of the group, along with one other man. Hundreds of Regulators marched on Hillsborough to force their release.

After other protests and petitions did not get results, the Regulators graduated to threats and occasional violence. A mob disrupted a court session in Hillsborough in September of 1770, threatened a judge, freed prisoners, and attacked the local clerk. When the court refused to meet the next year, Tryon, a veteran of the French & Indian War of the 1750s, gained approval from the Provincial Assembly to call for volunteers from existing militia regiments. In May he marched them from New Bern via Hillsborough toward Salisbury, picking up more men as he went (see Tryon’s March). This led to the fateful Battle of Alamance which brought the movement to its end.

Connection to the Revolution

Though some people think of this “War of Regulation” as a preview of the American Revolution, historians point out the complaints were specific to North Carolina and directed at the provincial government, not the King of England or its Parliament. A Granville County petition makes this clear: “‘it is not our mode or form of Government, nor yet the body of our laws, that we are quarreling with, but with the malpractices of the Officers of our County Courts, and the abuses which we suffer by those empowered to manage our public affairs…'”[2]

Also, many later Patriots fought in Tryon’s army against the Regulators. Perhaps the most direct connection between these actions is that military experience gained on both sides in the first contributed to the skills of militia on both sides during the Revolution. That is the primary reason this site includes a Regulators Tour.