The Same, Yet Different

In some ways, North Carolina’s government is the same today as it was before and during the American Revolution. There was a governor, a council of advisors, and a legislature. There were local governments, and local and N.C.-wide courts. But their names, who could be in them, what they could do, and who could vote has changed. As you read this website, the differences can be confusing.

This page briefly outlines European-American governments across three phases of Revolutionary North Carolina starting in 1729, to help you make sense of the terms you will see. For context, we add two sections on how the colony started and another on today’s government.

The first governments in today’s North Carolina were those of various Native American nations. See our page on the Cherokees, one of the largest, for a little about their government structure.

Spanish explorers were the first Europeans to pass through and try to settle. They built forts in the 1560s near Quaker Meadows (now Morganton) and at the Trading Ford by modern Spencer. These were strictly military installations, however, and both lasted fewer than two years.

Sir Walter Raleigh founded the first English colony on the North American mainland in 1585, on Roanoke Island near today’s Manteo. He named it “Virginia” for Queen Elizabeth, said to be a virgin. It was abandoned, and a few men left behind could not be found when Raleigh’s second group arrived in 1587. That one disappeared as well, and became known as the “Lost Colony.”

Forty years after a successful English colony started in modern Virginia, a landowner from there made the next British foray. Nathanial Batts apparently bought land from Yeopim natives in the northeast corner of today’s N.C. as early as 1648. But he only lived there while trading with them. A patron had a combination home and trading post built for Batts around 1655. It was somewhere on what now is called Salmon Creek, across the Chowan River from modern Edenton.

Batts’ ownership became legal in 1660 when a deed was recorded in Virginia for his purchase. (Notice that the county recognized the Yeopim as the prior owners of the land.) This was the first act of British government in North Carolina. 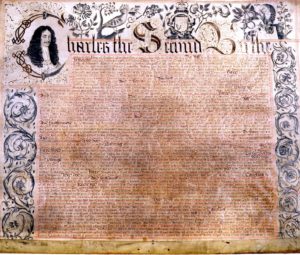 In 1663, King Charles II of England gave all of what now is North and South Carolina, first called “Carolana” and then “Carolina” in his honor, to eight wealthy supporters. These “Lord Proprietors” had helped him regain the throne after he was deposed. The Proprietors never visited Carolina, but each appointed a deputy, who apparently moved or lived here to represent him. Only a few hundred European-Americans lived in today’s N.C., mostly Virginia squatters here without permission. The large number of streams and swamps limited the available land and slowed growth.

The charter granting the Proprietors the land, updated just two years later, treated Carolina as an extension of the feudal system. Under that, a nobleman was effectively the king of his land, answering only to Charles.[1] Charles alone could declare war, but the colony could raise part-time defense forces called “militia.”

At the Proprietors’ request, a noble named Lord Shaftesbury worked with John Locke to create the “Fundamental Constitutions” for Carolina. (Locke later become a famous philosopher and influenced the authors of the U.S. Constitution.) The documents generally mirrored the English social hierarchy of: the Proprietors at the top; then higher to lower levels of nobles; next, small property owners; then tenant farmers; and finally, slaves. However, the constitutions added personal rights like trial by jury and the freedom to create new (Protestant) churches outside of the official Church of England. Realizing the new structure would take time to establish, the Proprietors sent with the constitutions in 1670 a slimmed-down temporary version that was more closely followed.

Initially the Proprietors broke Carolina into three counties: Albemarle, north of Albemarle Sound; Craven, most of what now is South Carolina; and Clarendon, from the mouth of the Cape Fear River down to Craven (all named for Proprietors). However, Albemarle later was expanded to cover all of what now is North Carolina. When the constitutions were sent over in 1670, Albemarle was broken into “precincts,” which in time became what we now call counties[2]. Meanwhile a second county was formed, Bath.

In theory the legislature had a broad range of powers compared to today’s. In practice, due to the veto power given to the governor and the Proprietors’ deputies, it became an extension of them. However, the assembly had to approve “money bills” covering taxes and public spending, which put some limits on what the governor and deputies could legally do. Plus, as precincts were added over the years, and the lower house gained more representatives, the legislature gained more power.

Until 1715, the two constitutions were loosely enforced. Residents had a high degree of independence. But they often resorted to force to settle disputes because there were so few courts; roads and bridges developed slowly; a consistent response to security concerns like pirates and the Spanish was difficult; and there was no safety net for the poor. North Carolina in particular had a high percentage of squatters and indigents. These included people who could not find land in Virginia after large landowners took most of it, and others in England given a choice between prison and getting shipped to America![3]

Governors in colonial N.C. were regularly kicked out for corruption, such as one who grabbed 46,000 acres for himself and was eventually banished. Subtracting his eight-year term, the colony went through 40 governors in 56 years. (For comparison, South Carolina “only” had 25.)[4]

From Private Property to Province

In 1729, the king’s administration (the “crown”) convinced seven of eight Lord Proprietors to sell their lands back to it. The four northern sections had already come to be called “North” Carolina, but this action made the split official, creating the “Province of North Carolina.” Lord Granville, owner of the 60-mile swath nearest Virginia, refused to sell to the crown, but eventually parceled it out to various buyers.

A more formal government structure was put in place modeled on England’s other colonies. As before, the only elected roles were the delegates to the lower house of the assembly. Any free male (including blacks) 21 or older who had resided in their election precinct for a year, and paid taxes the year before, could vote. Each voter initially had five votes to spread among the candidates for the House of Commons, but their choices were not secret—each person signed his ballot.

Among the problems of this structure was that early coastal counties had unfair power in the House of Commons: They were allowed five representatives each, counties in the southeast three, and western ones only two each. This contributed directly to the rebellion by the Regulators in the late 1760s.

The lack of secret voting made it easy for leaders to apply pressure or buy influence. In fact, voting became even less secret in 1760! After then, votes were cast verbally in the courthouse, in front of county officials. These practices allowed corrupt “courthouse rings” of large landowners—many of them justices of the peace and members of the assembly—to control the local governments and hold multiple county offices (a chief complaint of the Regulators). Justices appointed themselves to roles that made money because users, not general taxes, paid for the services.

In theory the provincial government continued until the official end of the war with the Treaty of Paris in 1783. In reality it disappeared when Royal Gov. Josiah Martin fled to Fort Johnston (today’s Southport) in 1775, and then offshore.

During the struggles between Martin and the Provincial Assembly, a group of property owners from the Cape Fear region invited the other counties to elect delegates to a “convention,” which later called itself the “Provincial Congress.” The majority of those elected were also assembly members, however. The first convention recommended that local leaders form five-member “committees of safety” to organize resistance to Parliament. (See, “What was the American Revolution?”).

After Martin left, the single-body convention became the legislature. In its fourth meeting, as the Provincial Congress, it declared support for independence through the Halifax Resolves of April 1776 and created a temporary constitution. As for the other roles:

The Fifth Provincial Congress was really a state constitutional convention. Delegates convened in November 1776 in Halifax and approved the new constitution the next month, creating the structure described below. Elections were held immediately after. The assembly appointed people to the governor and council roles on a temporary basis, until the new government took power in January 1777. That government formally joined the United States under an agreement called the “Articles of Confederation,” by ratifying them in April in New Bern.[a]

A key inclusion in the constitution was a separate “Declaration of Rights,” similar to the Bill of Rights added later to the U.S. Constitution. This provided some legal rights for free males not available in Britain. Among those, the delegates wrote in “that all persons shall be at Liberty to exercise their own Mode of Worship,” though only Protestant Christians were allowed to hold government office.

Although the basic structure of the government remains the same, the N.C. Constitution has been amended many times. Virtually all roles are elected. Any U.S. citizen 18 or older with permanent residence in the state and without a felony conviction can vote. There are no property requirements to vote or to hold office, though a candidate must have lived in the applicable region a set amount of time. And, votes are secret!

Unless otherwise footnoted, most of the colonial- and Revolutionary-era sections summarize the one comprehensive source found, a state-published booklet from the U.S. bicentennial celebration (Ganyard 1978). The panel on the Proprietary years is supplemented by an 1894 book (Bassett), and basic facts on the page were corroborated with multiple newer sources.

[a] “Minutes of the North Carolina House of Commons.” State delegates to the Continental Congress signed the articles on July 21 in Philadelphia.