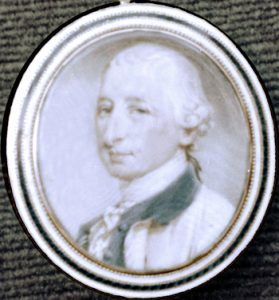 Though he has gone down in state history as one of the bad guys, the story of Josiah Martin is complicated. He was born in Dublin, Ireland, to English aristocrats with extensive landholdings in the Caribbean. After giving the law a try, he joined the military. He served for 13 years, including in Canada, and rose to lieutenant colonel, marrying a New York State cousin in the meantime. Then his brother, a member of Parliament, arranged for him to become governor of the Province of North Carolina after William Tryon. Martin tried to work with colonial assembly leaders, but Tryon left him a mess. Tryon’s military campaigns, combined with his failure to stop fraud by local officials, created a large debt Martin uncovered. At the same time Britain was ordering the colony to help pay for a border survey that would likely take taxable land from it. The assembly refused to help. Many of those local officials were in the assembly, so Martin’s attempt to address corruption added to the conflicts. Another example was a bill passed by the assembly allowing them to take liens against property in North Carolina for debts owed by nonresidents, primarily English lords. The British government forbade Martin to sign it, so he was caught in the middle. He felt compelled to order the assembly not to send delegates to the Continental Congress, but in August of 1774 it did anyway, and established county “committees of safety” that effectively replaced the royal government. The next year, growing rebellion caused him to send away his family and abandon New Bern for Fort Johnston. Finally forced onto a British ship by Patriot militia, Martin tried to arrange a military intervention with Loyalists and two imported British armies. But the Patriot victory at Moore’s Creek Bridge squashed those plans. He spent part of the war in New York State, during which time his wife died. He returned to accompany the British invasion of the South. Martin earned praise for his fortitude from Lt. Gen. Lord Charles Cornwallis as he participated in the entire N.C. campaign. He stayed in British-occupied Wilmington after Cornwallis, who claimed he had restored Martin to power, left for Virginia. Shortly after, though, Martin declared himself sick and gave up, taking a ship home to England. After the war he moved to London with his children, and represented Loyalists seeking compensation for their losses here. But he died at age 49 of unknown causes.