War Viewed through a Filter

The American Revolution was started primarily by landowners, lawyers, and merchants, which by law in 1775 were almost all Christian males of European descent. Not surprisingly, all of the war’s first historians were also white Christian males, so those histories were written from that perspective. This makes it difficult to find stories about people who do not fit that description.

Many of the leaders in the fight for freedom ironically forced Africans, Native Americans, and their descendants to work for them on pain of torture, and sometimes join them on campaign. The slave trade and labor stolen from those humans provided a significant amount of the money required for the war, and freed up slaveholders to fight. Tragically, these enslaved people’s names are mostly lost to history. We mention them whenever they do appear. 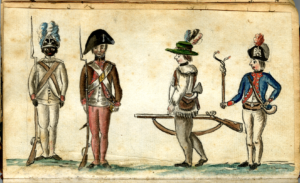 Free and enslaved blacks actively fought on both sides, however. Many volunteered as militia or in the regular armies, and free men were subject to Patriot militia service requirements in North Carolina regardless of race. (The state’s 1776 constitution also allowed free blacks to vote, a right they held until the Civil War.)

The Daughters of the American Revolution (DAR) published a large book on black and Native American soldiers in 2008, plus a later supplement, and found 270 Patriots of color from North Carolina alone.[1] An award-winning genealogy researcher says the number was closer to 400, and proves many received pensions and 640-acre land grants from the U.S. government like any other eligible veteran.[2] You can visit the grave of one who joined at age 15, Isaac Hammond, in Fayetteville. The DAR book names nine blacks (and a half-native) enlisted in the Granville County Militia Regiment in 1778, and others among N.C. soldiers held prisoner after the fall of Charleston in 1780. From the 1832 application for a veteran’s pension by one of those men, Samuel Bell, the book says he explained “‘he enlisted in the service of the United States because he believed it to be his duty to support his countrymen in the achievement of their independence.'”

There is a monument to African-Americans who fought at the Battle of King’s Mountain (S.C.), among other places. John Chavis, who later gained famed as a preacher and educator of both whites and blacks, was a veteran—one of 11 from that extended family in N.C, along with 15 from the neighboring states.[3]

After positive experiences with blacks in the Continental Army, Maj. Gen. Nathanael Greene and others recommended forming entire black regiments. He wrote in 1782, a year after his N.C. campaign, “that he was so ‘fully impressed with the practicality… and advantage of the measure that I cannot help working to see it attempted.'”[4] Southern leaders killed the idea.

Some Patriot slaveowners were cowardly enough to force slaves to fight in their place. One Continental soldier chickened out just before the Battle of Guilford Court House, and got out of trouble by sending an enslaved captive in his place, Ned Griffen. Griffen served with honor through the rest of the war, but when he returned home, the coward refused to free him as promised.[5]

It is no surprise most enslaved soldiers joined the British, due to promises of freedom that also were not always kept. Too often they were made to do general labor or used as craftsmen instead of soldiers, but these services were vital to the armies. “Many were employed as military laborers building fortifications, crafting weapons, making munitions, clearing roads, and shoeing horses. Others acted as spies or guides. Frequently, blacks served as musicians or servants to white officers.”[6]

Native Americans fought on both sides as well. Most tribes fought for the British, who promised to prevent Americans from settling on more of their lands. The Catawba sided with the rebels. The Cherokees conducted an ongoing campaign against western settlements in the South. Unfortunately, specifics of most of those battles are no longer known, so they could not be included on this site.

Women were not allowed to fight by the Patriots or British, though some did anyway, and others showed extraordinary courage in the face of opposing forces. Native Americans tended to be more tolerant of female warriors, and some Cherokee women participated in open battle. We have some women’s stories from the war, and they are included here where a related location is known and can be visited.

People whose disabilities did not prevent them from walking and shooting participated, such as Loyalist Col. Hector “One-Eyed” O’Neill. But their conditions are rarely called out in our sources unless in context of wounds received earlier in the war. The DAR book says African-American “Charles Roe lost an eye at the Battle of Stono (Ferry, S.C.), but continued to enlist.”[7]

There were openly Jewish and Catholic soldiers, as well as Deists (people who did not believe God is involved in our daily lives). It is likely Muslims were present among freed and current enslaved people from Africa who fought, and most Native Americans held tribal beliefs. A few suspected atheists are notably mentioned in general histories, but many kept their opinions to themselves, given that atheists were held in lower regard than any of those other groups at the time!

Since romance between males was punishable by death at the time, it is not surprising no records have been found identifying any soldiers or women from Revolutionary North Carolina as gay. Baron Friedrich von Steuben, a Prussian volunteer credited with training military discipline into the Continental Army, was homosexual. Based on modern biographies and statistics, it is certain other people with different gender and sexual orientations fought or otherwise served. Native American culture tended to be more tolerant of these differences, so perhaps some of the “female” warriors fit these descriptions. Prejudice has filtered out these stories as well, at least in the general sources this site used. We are forced to use binary male and female terms, because they are all we have in the historical record.

More information about the way minorities served the armies may be found on the “Army Camps” page. Hopefully more of their stories will turn up with additional research, in which case they will gladly be added to AmRevNC.

Browse locations with stories of African-Americans, Native Americans, and women.

[3] Rev. Chavis, reputed as a man of high character, stated he was a “revolutionary soldier” in a letter to his former student, U.S. Sen. William Mangum (Othow, Helen Chavis, John Chavis: African American Patriot, Preacher, Teacher, and Mentor [1763-1838] [Jefferson, N.C.: McFarland & Company, Inc., Publishers, 2001]). What he did during the war is unknown. The genealogical researcher mentioned in the text, source of the additional Chavis numbers, determined that records many sources relate to him—primarily a “bounty warrant” from a Virginia captain—were actually for another John Chavis (Heinegg, Paul, ‘Chavis Family’, in Free African Americans of North Carolina and Virginia [Genealogical Publishing, 2020] <http://www.freeafricanamericans.com/Chavis_family.htm> [accessed 31 May 2021]; Heinegg, Paul, ‘Re: Question on Chavis Family Page’, E-mail, 6/19/2021).