Beginning in May of 1776, a Cherokee faction angered by repeated violations of the treaties establishing the frontier border attacked European settlements from Virginia to South Carolina. They received encouragement from northern tribes, though older Cherokee leaders and most British agents counseled restraint (despite American rumors to the contrary). But colonist threats added weight to the belief Americans were already planning an attack. In a series of preemptive strikes fostered by Tsiyu Gansi-ni, “Dragging Canoe,” what became known as the “Chickamaugas” killed at least 40 people in North Carolina alone. 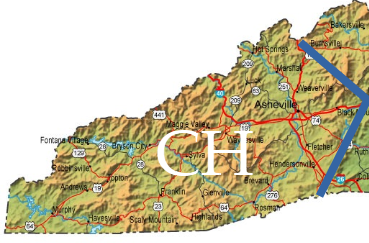 The overall commander of the western militia, Brig. Gen. Griffith Rutherford, gained permission from the North Carolina Council of Safety to retaliate by destroying Cherokee villages—whether or not they were involved in the attacks. He gathered various county regiments at Quaker Meadows (modern Morganton) and marched to Davidson’s Fort east of today’s Asheville. There he attracted additional soldiers and added supplies before moving west on September 1, in loose coordination with militia armies from the brand-new neighboring states. On the way back his army blazed his route, now known as the Rutherford Trace.

This tour follows Rutherford’s campaign of 1776 for much of its route, and visits some of the significant Cherokee village sites from it and two other campaigns against that nation. (A fourth in June 1782 essentially followed the Rutherford Trace with the same results, but few details are known.)

The last stop proves the Cherokee survive and continue to thrive.