British Inciter of the Overmountain Men 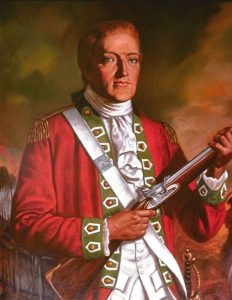 Born in Edinburgh, Scotland to a lawyer father, Patrick Ferguson joined the British military and fought in Canada during the French & Indian War. He returned to England to study at the Royal Military Academy and served briefly in Germany before a leg problem sidelined him, which resulted in lifelong arthritis. He later invented a rifle that could be loaded from the back of the barrel. (Highly praised, some were used during the Revolution, but the design was too expensive to produce in large numbers.) As a captain at the 1777 Battle of Brandywine (Penn.), marksman Ferguson may have given up a clear shot at Gen. George Washington because he thought it dishonorable. Instead, Ferguson was shot in the right elbow. Eight months of multiple procedures in British-occupied Philadelphia saved the arm but not with full use. Ferguson won a number of smaller victories in the north and was given command of an army of Loyalists, the American Volunteers. They were sent south to participate in the successful second attack on Charleston, where Ferguson was promoted to major. Cornwallis credited Ferguson with recruiting more than 4,000 men as his Inspector General of Militia. When the British Army advanced to Charlotte to resupply in 1780, Ferguson was ordered west with 1,000 men to protect its flank. His rank among these “provincials” was lieutenant colonel, but he continued to go by “major,” perhaps as a signal to his men to see themselves as important as British regulars.[1] Ferguson moved into the foothills, skirmished with Patriot militia, destroyed individual Patriots’ properties, and then made the mistake of threatening settlers across the mountains. The Overmountain Men came for him, and trapped his force on King’s Mountain (S.C.). During the ensuing battle, Ferguson was shot, dragged by his horse into Patriot lines, and killed. He remains there in a marked grave to this day.