If the House in the Horseshoe Historic Site is closed when you arrive, you can still view the back side of the house from a short distance outside the gate. But you are encouraged to visit when open and purchase a tour. We recommend you take our outside tour first to get full details of the skirmish here. Then take the site tour to learn the full history of the property and see inside the house. Call ahead for tour times.

The grounds are relatively even and there is a wheelchair ramp for house entry.

As part of an ongoing civil war between partisans after the main British and Continental armies left the state in Spring 1781, Patriots under Col. Philip Alston have been chasing Loyalist Col. David Fanning. Both men were infamous for their violent tactics.

Fanning’s force camped at the home of his friend Kenneth Black while taking captives from his Cox’s Mill camp near modern Ramseur to Wilmington. A day later Alston personally killed Black with a rifle butt, after Black was shot and wounded by one of Alston’s men. Returning to his base with 25-30 men, Fanning learned of the killing and that Alston had returned to his home. He led his band on a day-and-night ride from the Little River (northwest of today’s Fayetteville).

Alston had his home built in 1773 after buying 4,000 acres in the area. Also a justice of the peace and state senator, he expanded his estate through corrupt practices similar to those the Regulators had protested a few years earlier. According to one source, Alston was the commander of the Cumberland County Militia for a time as well as what he called “Alston’s Independent Partisan Corps.” He has returned here with 25-50 of his men from one or both forces.[a]

Walk to the “back” side of the house facing the downhill slope and river, which was the front side at the time. The current rail fence is believed to be approximately where a fence was then, based on archaeology.[1] Walk out to it and face the door.

Most of Alston’s men are sleeping on the two porches in the early morning hours. He and his family are asleep inside. From the south (downhill from the front door you can see), two shots reverberate. Moments later, two sentries appear at a sprint running up the hill, yelling to awaken their comrades. A scramble starts as the men grab their guns and rush into the house.

They barricade the doors and man the windows on both floors. Temperance Alston, Philip’s wife, gets an idea to protect her older children. She places a small side table in the bedroom (left-side)[2] chimney, and orders them to stand on it. She then takes cover in or under her bed with her infant.

Fanning’s men surround the house, taking positions on the ground behind the fence. Some evidence suggests Fanning was on this side after coming up the hill. He and his men open fire at random. Alston’s men break out the windows and fire back. Bullets pass through the walls—more than 30 of the holes are still there, as you can see in the door frame.[b] Some men inside are killed or wounded by these.

Walk halfway around the west (ramp) side of the house. Step back to where you can see the back porch and fences on that side. Unfortunately, no eyewitness accounts specify which side of the house some of the following events happened on. Both doors and porches existed, and the fences were all around it like today.

Among Fanning’s men is a free African-American (or a Scot, one participant claimed years later).[3] Early in the fight, Fanning offers him money to try to set the home on fire. The man lights a torch and runs toward the house, but is shot and badly wounded. One eyewitness claimed years later that Alston fired the shot.

A British regular-army lieutenant serving as an advisor approaches Fanning and asks permission to enact a plan. Fanning agrees, and Lt. McKay (first name unknown) calls for volunteers to try to break through the front door. A few agree. McKay orders the other Tories to lay down continuous fire. When it starts, McKay leaps over the fence and several men jump up. Almost instantly he falls, shot in the chest, as do most of the volunteers.

The shooting continues for two hours. Several Tories, presumably using Alston’s barn for cover, look inside and find an oxcart. Someone hatches a plan, and if it wasn’t Fanning, he certainly approves. They fill the cart with hay from the barn, push it out, and light it on fire. Hunkering down behind it, they start to roll it toward the house.

Finally the front door, probably, opens, and a white cloth is waved. Temperance Alston slowly steps out. Her husband, seeing the cart afire and realizing what was next, decided to surrender. But they both knew he would be shot on sight, so she asked to do the talking. She edges tentatively onto the steps on your right.

Fanning says he will meet her halfway, and the two walk toward each other. There she reportedly says, “‘We will surrender, sir, on condition that no one shall be injured; otherwise we will make the best defense we can; and if need be, sell our lives as dearly as possible.’”

Fanning agrees to spare them. The Patriots exit the house, no doubt wondering whether the infamous Tory will keep his word.

He does, writing out a statement each man signs. It is addressed to Sir Henry Clinton, the British commander-in-chief in America. In it, the signee acknowledges that he is a prisoner of war under parole. He also promises that he will stay within five miles of his home, “and that I shall not in the mean time, do, or cause any thing to be done, prejudicial to the success of his Majesty’s arms; nor have any intercourse or hold correspondence with the enemies of his Majesty…” Finally, each man agrees to surrender himself if required.[5]

Go to the family graveyard further to your left. Stop at the near edge, by the memorial to Benjamin Williams. 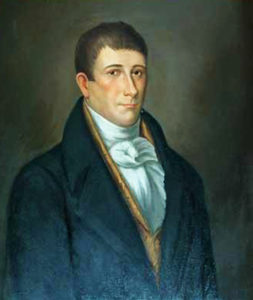 In 1798 the house was bought from its second owner by Col. Benjamin Williams, buried here behind his 20th-Century memorial. Descended from an early Jamestown (Va.) colonist, Williams was born to the wife of a merchant and justice of the peace on New Year’s Day 1751 near today’s Smithfield. Educated in local schools, he was a farmer when elected to the rebellious First Provincial Congress in 1774. He participated in the dramatic confrontations with Royal Gov. Josiah Martin that led to Martin fleeing the colony, and in the congress in Hillsborough that set up the new N.C. government later in 1775. There Williams was made a lieutenant in the North Carolina 2nd Regiment of the Continental Army, rising to captain shortly after independence. Meanwhile he joined the New Bern Committee of Safety, effectively the new local government.

Williams served with the regiment in Gen. George Washington’s army, fighting at the battles of Brandywine and Germantown (Penn.) and the victory at Monmouth Court House (N.J.). He resigned on his birthday in 1779 and was elected to the state House of Commons. When the British army invaded North Carolina in 1781 (see “The Race to the Dan”), he volunteered for the state part-time “militia” troops. Williams was at the climactic Battle of Guilford Court House in modern Greensboro in February. His regiment was among the few that held their position on the first line long enough to fire three volleys as ordered. As a result of his valor, he was promoted to colonel and given command of a militia regiment that July. The next month he married Eliza Jones, daughter of the colonial attorney general.

He served in the state senate and house for many years during and after the war; the state constitutional convention; and one term in the U.S. Congress.

The year after buying this property, Williams was elected governor and became president of the first board of the University of North Carolina. He helped select its site in Chapel Hill. He was re-elected governor twice, and in that role pardoned the killer in the most famous duel in the state (see New Bern). Meanwhile, Williams turned this property into a cotton plantation. As of 1803, around 50 enslaved workers were held here.

Williams died in the house at age 63, in 1814, and was buried in the family graveyard 1-1/2 miles away. Eliza died in New Bern three years later at 54. Their graves were moved here in 1970 after being vandalized.

Alston’s pre-war corruption and vigilante violence during the war was reflected in his post-war years. “He was twice indicted for murder, removed as a justice of the peace, and suspended from the state legislature for a variety of reasons,” a state pamphlet about the house says. “After escaping from a Wilmington jail in 1790, where he was being held in contempt of court, Alston fled to Georgia, where an unknown assassin killed him in 1791.”[6] He sold the house to the second owner during his escape.

[2] House in the Horseshoe: Self-Guided Tour.

[6] House in the Horseshoe: Still Bearing the Scars of the American Revolution.