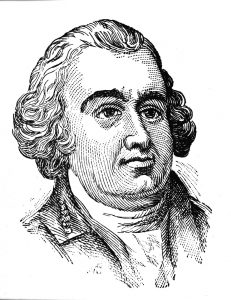 Born in Ireland to a formerly wealthy family, raised by an uncle because of “relentless rancor” at home, Thomas Burke emigrated to Virginia by age 17. He became a doctor and felt he was good at it. But it didn’t pay well, so he shifted to the law instead, practicing in Norfolk.[a] He also wrote poetry! An early rebel, he published his opposition to the 1765 Stamp Act. In 1770 Burke married Mary Freeman, and two years later he bought a plantation north of Hillsborough, which he named “Tyaquin” after his family home. The move came, he wrote, to stop him from overworking, and because he felt the climate was healthier.[b] An unknown number of enslaved people worked the farm.

After serving in the provincial congresses that created the state government, Burke was elected to the Continental Congress in 1776. He had lost his left eye to smallpox (despite what his picture shows), but told good stories, “sang a good song,” and was able to write poetry on demand.[1] When a new county was carved out of Rowan in the west the next year, the assembly named it for him. Burke observed the 1777 Battle of Brandywine (Penn.), and soon after left Philadelphia with the rest of the Continental Congress upon the approach of the British Army.[c] But he continued in the congress, with occasional trips home to care for the farm, until the chaotic year of 1781, when he was elected by the General Assembly to be the third governor of the state. He did what he could to reform the militia and the courts, initially from Halifax.[2] Controversy arose when he vetoed assembly decisions, common now, but not allowed under the state constitution then. Just three days after Burke moved back to Hillsborough to help suppress Loyalist activity, he was kidnapped by Tory leader David Fanning. He was turned over to the British in Wilmington and then imprisoned in Charleston.

Sources differ on what happened next. Burke repeatedly wrote letters to the commandant there that were ignored. He was told he continued to be held after the Redcoat surrender at Yorktown as a hostage to prevent executions of Loyalists like Fanning.[d] After a tough couple of months he somehow escaped, supposedly afraid for his life, and indeed someone was shot at his abandoned quarters the next day.[3] Many modern sources say his peers condemned his escape as dishonorable, because he broke a parole giving him a degree of freedom on James Island… or perhaps because he was finding corruption in the public accounts.[4] But a biographer found no negative discussions in the official assembly records, and says a court convened at Burke’s request cleared him to resume the governor’s role. He effectively resigned in April 1782, however, telling the assembly, “I do not now feel the necessity of sacrificing my time and industry, which are absolutely necessary to retrieve my private affairs from the ruin in which my being constantly employed in public” service had left them, including “debts and… private distresses.” In October, Maj. Gen. Nathanael Greene wrote him, pointing out challenges still facing the new country and urging, “Think not, therefore, of retiring soon.”[e] In the same letter Greene told Burke he was officially free, having been included in a general exchange of prisoners. By then Burke had returned to the law and running his plantation. He died at Tyaquin a year later, only around 39, after at least six months of illness. He remains buried on the property.

[c] Contrary to some modern texts, Dunaway found no sources from the time showing that Burke fought at the battle.