A pullout between NC 58, Peacock Bridge Road, and the creek provides a decent view from within your vehicle. Due to a downhill slope there, you can get a better one with a short walk through the grass.

After recuperating in Wilmington from the Battle of Guilford Court House, the main British army of the South under Lt. Gen. Lord Charles Cornwallis is leaving the state in hopes of joining with other forces in Virginia.

The 160-man cavalry of Lt. Col. Banastre Tarleton and some mounted infantry soldiers[1] are riding a couple days ahead of the rest of the army, clearing the intended route of any rebel opposition.

The Pitt County Militia, part-time soldiers under Col. James Gorham, have mobilized to stop the British. (This area was part of Pitt at the time.)

Walk behind the guardrail until you have a good view of the bridge and the highway into the distance.

In your mind’s eye, replace the modern bridge over Contentnea Creek with a sturdy wooden one. The creek was a highway for shipping goods to New Bern via flatboat, especially naval supplies like pine tar and turpentine.[2]

Starting in 1743, Samuel Peacock was granted this land and the tract on the far side, a total of 833 acres. First he operated a ferry here, but then he was licensed by the North Carolina Provincial Assembly to build a toll bridge, completed by 1751. Had you crossed then, you would have paid these government-approved rates:

Peacock lived on this side until he sold his land, and the bridge, to Samuel Ruffin three years later. Samuel moved to a tract next to his brother John’s. John owned the next bridge south, over Nahunta Creek or Swamp. So there was briefly a Peacock monopoly over this stretch of the route from Wilmington to Halifax![5]

In 1774, two years before he became the first governor of the new state of North Carolina, Richard Caswell paid 10 shillings to cross here heading up to Halifax.[6] Ruffin rebuilt the bridge the next year.[7]

The right to collect tolls under that earlier law ended in 1776 when the colony did, but Ruffin continued to charge them anyway. In fact, because the creek is fordable half the year, he dropped large trees along the creek bed on either side, to force people to use the bridge! In 1778, an indignant General Assembly took the franchise away from him. The assembly levied a fine of five pounds for each offense if Ruffin ever again charged someone for crossing the bridge, as the state felt he had been “more than abundantly reimbursed.” It also authorized another man to build a bridge over the creek. It is unclear from later maps whether that man replaced Ruffin’s with his or built another nearby first; regardless, that man has a third bridge at this spot in 1781. But reports from the Revolutionary War still called it “Peacock’s Bridge.”

On this side of the bridge on May 6, in the road and spreading out around you, are about 400 militia. These men are dressed in everyday clothes and carrying whatever weapons they own. They no doubt chat nervously as they wait, until a moving dot of green appears on the dirt wagon road (now NC 58) far to the south across the creek. They take positions as the dot grows into the approaching British Legion, heavy cavalry or “dragoons” wearing green jackets, followed by perhaps 50 Tories.[8] Most sources say Tarleton is with them. A Wilson County historian who traced the British march says Tarleton himself was upstream at Cobb’s Mill (later Wiggins’) near modern Wilson, but sent patrols out.[9]

Probably 100 yards or more from here—past the effective range of most weapons of the day—the horsemen draw sabres and charge. The militia fire at least one volley, but soon the British are on the bridge, and the Patriots lose heart. They scatter in all directions, most likely heading into the swamps or creek where the horses cannot follow.

After ensuring they have dispersed, the patrol continues up the road—presumably without paying any tolls! Tarleton must have been surprised whenever he learned the news, since the day before, he had written Cornwallis, “The Country is alarmed but the Militia will not turn out.”[10] 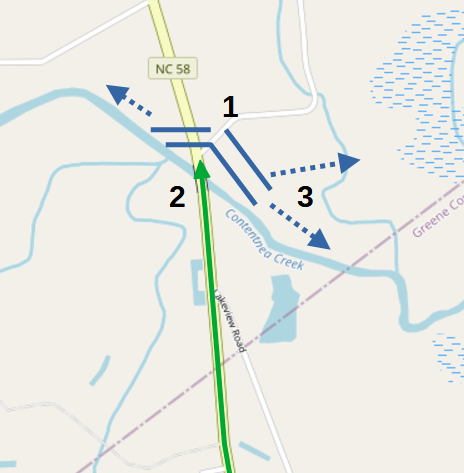